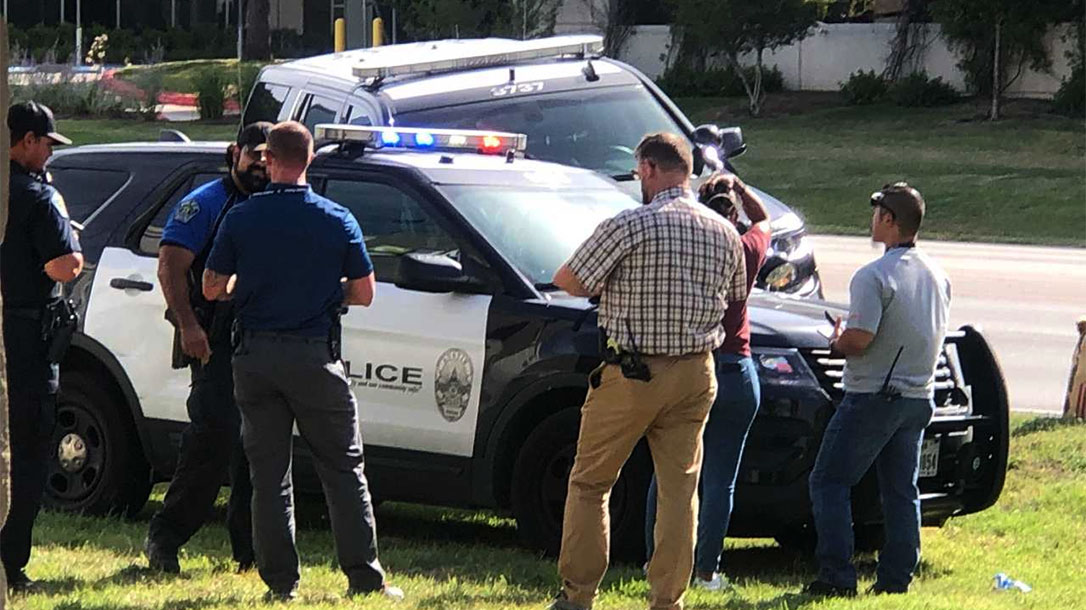 A suspect with an extensive criminal history of aggravated robbery faces justice after an intended victim shoots him. The event occurred June 14th at a Domain, Austin shopping center. As a result, the actions of the victim not only proved that guns save lives, but also ended a string of armed robberies.

According to an affidavit, the 17-year-old suspect came up behind two people walking through a parking lot at 4:11 p.m. Wearing a black shirt wrapped around his face, the suspect then pointed a gun at the two, grabbing one’s bags. According to reports, he took a shopping bag and backpack from the victim.

A KVUE ABC report states, “Out of fear of being shot, the victims complied. They said the suspect then began to climb into a vehicle that had pulled up behind him. One victim approached the subject, saying he again pointed his gun at her and told her to ‘watch out.’”

Upon seeing the suspect point a gun at the woman, the other victim drew his concealed pistol and shot the suspect.

Although the robbery suspect left in the car, it made it less than a mile before another passenger called 911 for help. Shortly after police arrived, the suspect was transported to the hospital with a life-threatening gunshot wound.

The armed robbery suspect survived and is now facing a charge of aggravated assault with a deadly weapon. However, considering certain elements surrounding the case, this isn’t new to him.

According to KXAN News, “According to the arrest affidavit, Reed has an ‘extensive criminal history of aggravated robbery’ and is a suspect in robberies that happened in the last few weeks.”

Not to mention, according to the story, the suspect removed an ankle monitor he was under orders to wear. Likewise, another related affidavit shows the suspect dropped the gun at the scene, which was later found to be stolen.

Ending A String of Armed Robberies

The suspect’s release on May 27 from juvenile custody included an ankle monitor, according to a separate KXAN News report. Just two days later he cut the monitor off and committed nine armed robberies in five days.

The police said that all of the robberies happened during the day and some victims were pistol-whipped. In fact, the suspect was in a stolen car that was part of a robbery just an hour earlier. When police recovered the vehicle, they not only found the victims’ belongings but several handguns as well.

This is clearly a pattern of behavior with the suspects.

The report states, “Austin police said they knew Reed, Rossum and the underage person from a 2021 investigation into a string of robberies and car thefts, the affidavit said. That series involved nine aggravated robberies and several stolen vehicles, APD said.”

The actions of this legally armed citizen ended a crime spree that could have gotten much worse if left unchecked. There is no knowing where this spree would have led, but fortunately, we are not finding out the hard way. Another solid example that guns save lives.