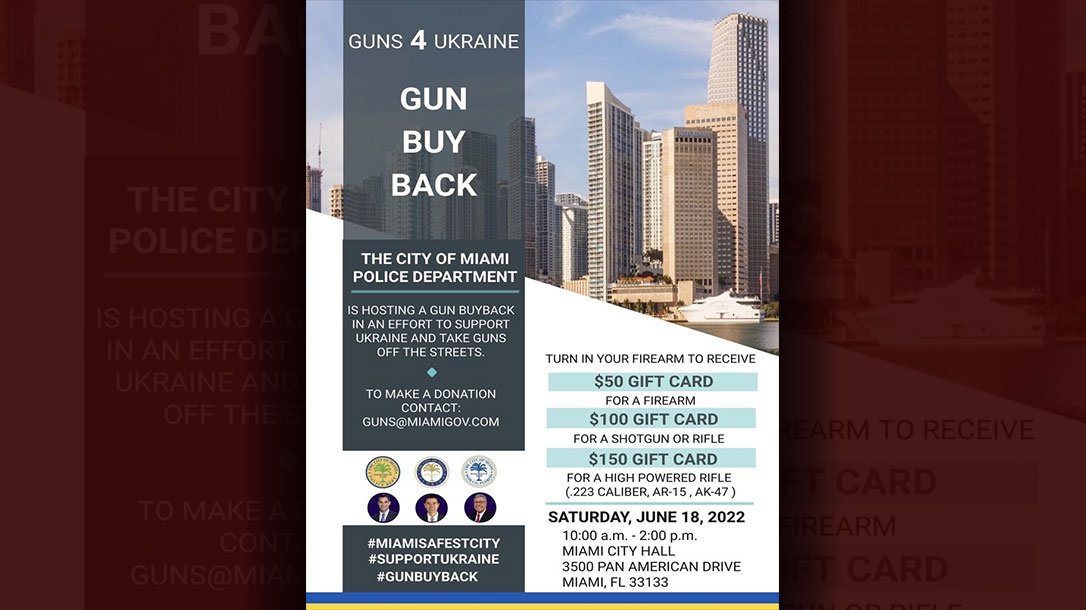 In today’s edition of “you can’t make this stuff up,” the city of Miami is breaking both state and federal law to illustrate the importance of an armed populace. Of course, I am sure that is not the intent but it sure is the result. By proposing a gun buyback to help arm Ukraine, the city of Miami is inadvertently telling citizens to stay armed.

The Miami Gun Buyback Program Is Fraught with Issues

First, let’s be clear, this has nothing to do with arming Ukrainians in the face of an invasion. This is just another attempt to capitalize on the emotions and generosity of the American people. It’s classic bait and switch.

According to local news source Miami New Times, Commissioner Ken Russell says the effort is just an incentive to reduce the number of guns in Miami.

“This could move a lot of guns off the street — that’s primarily where this comes from,” Russel said.

Labeled “Guns 4 Ukraine,” the gun buyback event is not the first conducted by the Miami Police Department. The south Florida city staged a similar event in 2018 following the mass murder at Marjory Stoneman Douglas High School.

However, there wasn’t a current invasion in Ukraine at that time. The only thing either of these buybacks have in common is that they’re a knee-jerk reaction to public outcry. This has nothing to do with Ukraine.

Are They For Real?

Further illustrating that this has nothing to do with Ukraine, the prices they are offering are not serious.

According to NBC 6 in Miami:

“The event will be held Saturday, June 18th at City Hall from 10 a.m. to 2 p.m. The gift cards will be distributed as follows:

The SAF (Second Amendment Foundation) puts it best, “Historically, police gun buybacks do little to deter crime. They’re a public relations stratagem used to make it appear as though police are cracking down on crime by putting guns on a table in front of the media. A better name for the event would be ‘cash for clunkers,’ since the guns police actually buy back are cheaply made [or] rarely function.”

They are trying to buy guns for the price of some Nerf guns. Granted, they are high-end Nerf guns, but they are toys nonetheless. The idea that they are going to get anything other than broken-down garbage is laughable.

What do they think Ukraine is going to do with a rusted-out .22 from Grandpa’s attic? As I remember, Zelensky stated that they need long-range artillery, MLRS platforms, and anti-tank systems. But sure, an unmaintained 1930s side by side with worn-down firing pins and rusty action will probably work too.

Not to mention, depending on how far people are traveling to bring their firearms, those better be gas gift cards.

Breaking the Law to Disenfranchise the Law Abiding

So, this is kind of a new one. The Miami City Hall event is breaking both state and federal law.

According to the SAF, “Their plan was fraught with legal entanglements, since shipping firearms to a foreign country without the proper paperwork violates federal law, specifically the International Traffic in Arms Regulations, known as ITAR. The plan also violates state law, specifically, Florida Statute 790.08, which regulates what police can do with firearms or other weapons that come under their control. Shipping guns to a foreign military is not one of the options allowed by the statute.”

While conducting some actual investigative journalism, the SAF reached out to the Miami Police Department about the two laws. What it received was a word salad that says the City of Miami will work to obtain necessary export licenses. In other words, they put the cart before the horse.

The SAF goes on to explain, “Even if they’re able to obtain a one-time export license from the State Department or Department of Defense, which ITAR experts say is unlikely, the process can take months or even years.”

So, by the time they clear the red tape, Ukraine might not even need whatever the buyback harvests.

This Doesn’t Send the Message They Think It Does

Perhaps the funniest part of all of this is that the messaging from gun control advocates is defeating itself. And this latest attempt in Miami Dade just piles on the same self-opposing narrative:

Not to mention, “Guns don’t save lives. Also, we need to send guns to Ukraine because guns save lives.”

Of course, it went about how you would expect:

Second Amendment advocates would like to thank the City of Miami and George Takei for their help in illustrating the importance of an armed populace. Your example is helping open many eyes and is appreciated.