What happens when you’ve had a heavy-duty pistol for almost 20 years and have put it to some heavy-duty use, but it needs a tune-up? Why, you send it back to the original source.

Let me give you a preview of this story: It’s about a well-used, high-grade pistol that went back for some refurbishment, and to tell the whole story we need to look at the pistol, its development and purpose, and the basic principle of “tailoring the tool to the task.”

In 2004, Springfield Armory put together two of its greatest human assets, Rob Leatham and Dave Williams. I’ve known Rob since the early 1980s when he was coming up on his stellar career path in professional shooting. When I once asked him how many world championships he had won, he had to pause for an amazingly long time to count. This tells us something. When someone has won so many times he has lost count, it tells us that when he speaks we should listen.

It is not for nothing that Rob Leatham was nicknamed The Great One – “TGO” for short – by his peers.

That other resource of Springfield Armory I mentioned is Dave Williams. His many years as head of the Custom Shop at Springfield Armory (and currently now heading up the Research & Development department) understates all the rest he has done in terms of design and product improvement for that company. He is one of the all-time greats in that side of the business, and an absolute master of the 1911 pistol.

Together, they came up with a concept that debuted in 2004. The aptly named “TGO” pistols, appropriately named the “Legend Series,” represented a combination of what a world champion had learned about the 1911 … and what a master of gun-building in general, and 1911s, in particular, had learned about that side of the matter.

Made up initially of three guns, the TGO series of .45 ACP pistols was a hit. I was able to test out the TGO II, the mid-level option in the line (the TGO I was a full-blown custom gun, and the TGO III was a lightweight production pistol). I was very impressed – so much so that I purchased the TGO II. I had been shooting 1911 .45’s starting in 1960 at the age of 12. I appreciated the TGO II’s good trigger, the adjustable sights to better take advantage of .45 ACP versatility with different loads, and the ambidextrous thumb safety.

I didn’t need the forward slide grasping grooves, though I knew others liked that feature, but I did appreciate the “just-right” checkering of the front and back-straps of the frame, and the slim grips that reduced the gun’s girth. That latter feature let me wrap more flesh and bone around the “interface” of the pistol, particularly important in one-handed shooting with a powerful handgun. It also let me get more finger on the trigger for greater leverage in fast shooting.

The years ticked on. I used it mainly as a competition gun, appreciating its sweet sub-4 lb. trigger in matches where hundredths of a second meant winning or losing. The TGO II was built to compete with one-off custom guns by master pistolsmiths who had to charge big bucks for their many hours put into the gun, and so-called “boutique” manufacturers who had to do the same. To gain both precision accuracy and the reliability John Moses Browning designed the platform for was not an inexpensive thing. With economies of scale, Springfield Armory was able to produce a comparable gun for less than most other makers charged, and in some comparisons, for much less.

Over the years, I won some IDPA matches with this gun in CDP, the Custom Defense Pistol division of the International Defensive Pistol Association. I shot it in bowling pin matches, and when the premier of those — the great old Second Chance Shoot — was reborn as The Pin Shoot in 2017, it came along with me for use in the Stock Gun class every year since.

I lent it to a lot of other shooters for IDPA, Single Stack and USPSA competition. As the Indiana Jones character said in that movie, “It’s not the age, it’s the mileage.” The mileage, and the wear, was accumulating.

This early TGO II, serial number RL 130, went through the hands of a couple of other pistolsmiths. One had it to increase the trigger pull to 5 lbs., because I thought I might use it for a while as a carry gun. Another reduced it to 3 lbs. or a little less when I decided to use it strictly for competition again. While all this work seemed like a good idea at the time, I soon found that the trigger needed to be restored as I was having some malfunctions. This was a pistol with a lot of rounds through it, and one that had had a lot of cooks in the kitchen working on it. I needed to get this pistol back to the original source.

The Custom Shop’s Custom Pistol Tech Jeremy Sides told me, “We found no signs of abuse. The sear spring was really stiff; we couldn’t get a good adjustment, so it was replaced with a lighter sear spring. We also replaced the hammer and sear as they had some wear on them from years of use.”

This TGO-II still has a full-length recoil spring guide in place. These complicate takedown and reassembly somewhat, but Jeremy notes, “I like the full-length guide rod just because it keeps the spring in place, helping the longevity of the spring, but it’s not a necessity. I think it also promotes smoother cycling.” The recoil spring is 18.5 lbs.

Total cost for the work: $275. Springfield Custom quotes two to three-week turnaround, and delivered on that, too.

It should be noted that the Custom Shop wants people to sign a waiver if the trigger pull they want is going to go below factory spec for a duty weapon. As a general rule of life, “target triggers” are for target shooting sports, and “duty triggers” are for guns to be used in life-threatening situations under extreme stress. Springfield Armory knows the difference. Users should, too.

This trigger is sweet and is like I remember it when I first received the pistol many years back. When I benched it at 25 yards upon its return, just a few weeks after sending it to the Custom Shop, I squeezed off five rounds of the first .45 ammo in my stash that I laid hands on, Remington 185-gr. JHP. I had four shots in 1.05” when I felt myself pull the last one, extending the group to 1.95”, and the best three were seven-tenths of one inch apart, measured center to center. This told me two things about the pistol.

One was that the built-in accuracy was still there. I’ve found over the decades that if an experienced shooter on a solid rest fires five shots without a “called flyer” that the shooter knows he screwed up, the best three of those would generally about equal what all five would have done from a machine rest. I did have a called flyer, as noted. The “best three” showed me this was still a “one-inch gun” at 25 yards in terms of inherent mechanical accuracy.

The other thing it showed me was the quality of the custom trigger job. If you can feel yourself jerk the shot and it’s still inside a 2″ group at that distance, the pistolsmith who tuned your gun has done a helluva fine job!

Those five shots also gave me an appreciation of the adjustable sights on the TGO II: an original Bo-Mar on my old sample. The group had centered about two inches above the 1.1” aiming dot. However, I remembered I had sighted this gun in for the Federal HST 230-gr. +P .45 hollow point that has worked well for me at The Pin Shoot. So, I took three rounds from my dwindling stash of that now-Unobtanium ammo and moved up to 25 feet, the regulation pin shooting distance. Holding six o’clock in the center of the bottom edge of the head box of an IPSC target, I squeezed them off … and they all hit in a three-leaf-clover group exactly where aimed. The BoMar sights, as expected, had held their zero, and all was well.

Experts tell us that +P ammo beats up our .45s about twice as hard as G.I. ball, and way more than target loads. This gun has had a lot of +P through it. Not being a carry piece for most of its existence, the wear was on the inside much more than the outside. The trip back to Springfield Custom did exactly as intended. The trigger is sweet and crisp with no over-travel, also known as backlash. This gun is back to where it should be and will be with me at the range for many years to come.

I don’t know whether I’m gonna shoot the Stock Gun event with the TGO II again, or with a Springfield Armory Custom 10mm XD-M I have; that decision has yet to be made.

But, thanks to Jeremy and the team at Springfield Custom, I know my old TGO II is back in business and ready to perform. 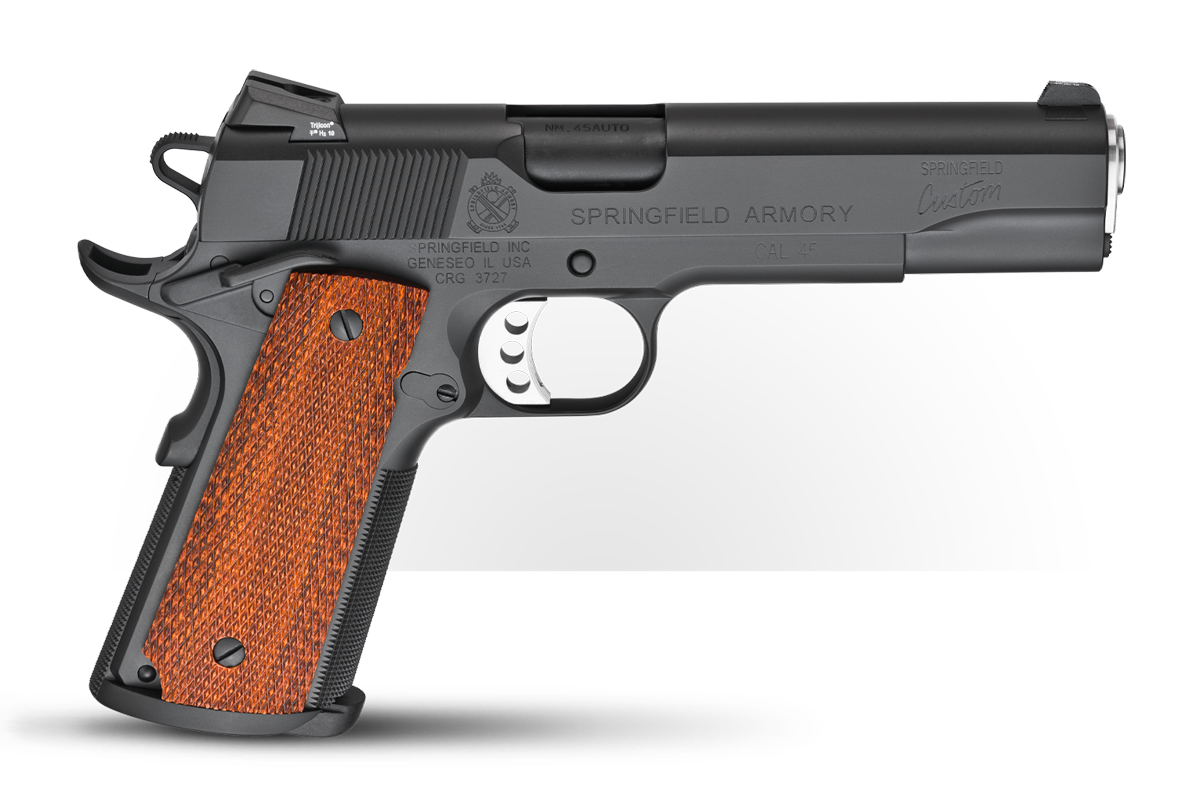