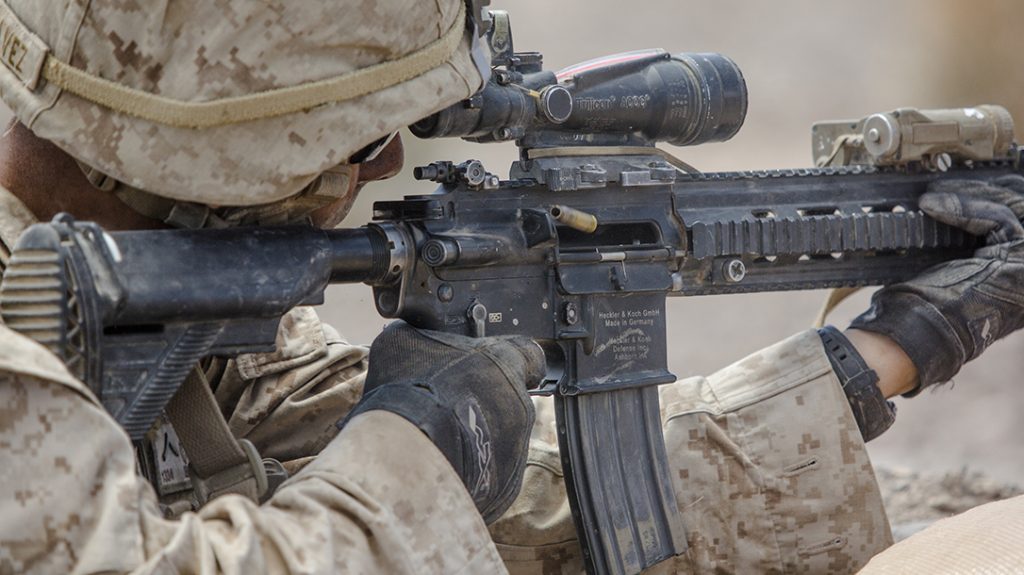 Halfway around the world, Ukrainians are exhibiting bravery and courage in the face of an invading Russian army. Meanwhile here in America, Democrats, the political party that supports disarming and restricting the Second Amendment rights of their country’s law-abiding citizens, and that pushes to defund law enforcement, would tuck and run if their country were invaded.

Fight or Flight: Democrats Would Tuck and Run

A majority of self-described Democrats, 52 percent, say they would leave the United States if America were being invaded rather than stay and fight.

The new Quinnipiac poll asked voters a hypothetical: Given what is happening in eastern Europe with the Russian invasion of Ukraine, “What would you do if you were in the same position as Ukrainians are now: stay and fight or leave the country?”

More than two-thirds of Republican voters, by a margin of 68-25, say they would stay and fight. A healthy majority of Independents would make a stand as well, 57-36. In a sad display, more than half of Democratic voters surveyed, 52-40, said they would flee.

Buoyed by the healthy margins of Republicans and Independents, altogether 55 percent of American voters said they’d fight rather than turn tail and run.

“When confronted with a terrible hypothetical that would put them in the shoes of the Ukrainians, Americans say they would stand and fight rather than seek safety in another country,” said Quinnipiac University Polling Analyst Tim Malloy.

Democratic voters would not only hypothetically take flight, either. They and the gun control groups are – in reality – working to dismantle the Second Amendment and punish the industry that provides for the ability to exercise that right to purchase and possess firearms.

The Founding Fathers preserved the right to keep and bear arms in law for good reason. Russia’s authoritarian leader Vladimir Putin ordered his army to invade neighboring Ukraine, believing taking control over more territory would be an easy task. Ukrainians had other ideas. President Volodymyr Zelenskyy emboldened his citizens.

“We will give weapons to anyone who wants to defend the country. Be ready to support Ukraine in the squares of our cities,” President Zelenskyy tweeted. “Don’t panic. We are strong. We are ready for everything.”

He continued, “We will defeat everyone. Because we are Ukraine.”

They’ve valiantly held back advances by Russia and Ukrainian leaders empowered their citizens to take up arms and fight for their country. Other countries have donated and shipped more arms for Ukrainians to use, including the United States.

Civilians who have never held a firearm arm before are quickly receiving training. Oleksandr Krasivskiy, a Ukrainian sales manager, said, “Here we receive more of the tactical training. How to move with the gun. How to operate it in building with the gun. What should we expect when we are in the combat situation. It’s totally new for me. I’ve never done this before and never interested before this whole situation started,” he said.

“Nine days ago I was teacher of makeup,” added Territorial Army Volunteer Svetlana Kalanova. “There’s no purpose for why they do this. I want to fight also because this is my country, this is my home. Everything is here.”

Operating her firearm has become second nature to her in a short time.

Reinforcements On The Way

Much of America believes so strongly in the Second Amendment here at home that they’re helping Ukrainians defend their country with arms and munitions. NASCAR legend Richard Childress, along with AMMO Inc., donated 1 million rounds of 7.62mm ammunition to Ukraine, as did Vista Outdoor’s family of ammunition manufacturers of Remington, CCI, Speer, and Federal Ammunition. Adams Arms announced they’re shipping rifles to help the effort. Several other members of the firearm and ammunition industry are assisting too.

“This is a wake-up call for America, and why we have to have our Second Amendment…To see the people in Ukraine fighting — it’s terrible to see the lives that are being lost over there,” Childress told Fox News.

It is far too common for people to think “that will never happen here.” Or can it? Ukrainians are experiencing it now with the invasion by Russia. Canadians are getting a taste as Prime Minister Justin Trudeau invoked Canada’s Emergency Powers Act to trample on the rights of Canadians for 30 days and they’re facing a looming mandatory gun confiscation deadline.

The truth is gun control advocates and their allies in elected office scheme every day to extinguish the Second Amendment. When legislative efforts to impose more gun restrictions fail, gun control goes a different route. Financial service providers, banks, and corporate boardrooms are implementing gun control by discriminating against and inhibiting lawful businesses that provide a Constitutionally-protected right to own firearms.

The firearm industry is fighting back on this new angle of attack through state and federal-level financial industry nondiscrimination legislation. However, it’s voters who will ultimately tell gun control politicians what to do with their restrictions.

Support by voters for more gun control is the lowest level in years, while lawful firearm purchases have hit record highs. Americans are seeing in real-time just how fragile their rights are if they aren’t willing to fight for them.