I am always interested in innovation in the firearms industry. While it seems there are many new products introduced at a regular pace, few are truly innovative. Typically, new products are familiar products in a different caliber or barrel length. Or maybe a new finish. You get the idea.

Don’t get me wrong, I like options, and we live in the golden age of options in the gun industry. Sometimes it seems, however, that there is a lack of actual innovation. I’m always looking for something that attacks a problem from a different perspective.

I like to stay on top of what might be coming down the pike, so I recently asked my friends at Springfield Armory what cool new things were happening in the AR world. They gave me a little bit of email side eye, we reviewed my non-disclosure agreement and then a conversation started about an innovative AR-15 accessory called the LevAR.

The AR-15 is a mechanical device. As a result, it can fail. Even if you have the best-made, highest quality rifle, it is still beholden to Murphy’s Law. That is only to be expected. At the same time, I’ve had a great experience with my Springfield Armory SAINT AR-15 rifles. They have been incredibly reliable firearms, and the only malfunctions I have experienced have been user-induced or magazine-related.

That really means two things. First, the majority of the malfunctions occurred because the user, that’s me, screwed something up badly enough to malfunction the gun. In my case, part of a cellophane wrapper found its way into a mag pouch, the mag trapped it and I actually tried to load a 5.56 round and the wrapper into the chamber. That was a mess.

The second situation resulted from using a magazine that was worn and out of spec, which caused the rifle to malfunction and fail to feed. Three failures to feed from the same mag and 100% reliability from every other mag was all I needed to know about that situation. That mag got smashed and trashed.

And there is a third and even bigger worry for me — bad ammo. My fear is coming across ammo that is defective or out of spec. Trying to chamber or eject a round that is defective and having the case stick in the chamber is a problem. A serious problem. This type of malfunction is simply referred to as a stuck case.

A stuck case can be a real headache to address. The traditional way to deal with one is to mortar the rifle, which is a process. The first step is recognizing that you have a malfunction. My standard response is simply to smack the mag into the gun and run the charging handle. When you try to rack the charging handle, that’s when you find out the situation. If you have a stuck case, that charging handle simply isn’t gonna move.

Once you have identified this is the problem, you should immediately move the rifle’s selector to “SAFE.” Next, you collapse the buttstock to the fully closed position. Orient the rifle vertically, then grasp the charging handle so the latch release lever is depressed. Finally, sharply strike the buttstock on the ground, ensuring you strike the receiver extension tube end of the stock, first.

If done correctly, the result should be the charging handle moving to the rear and extracting the stuck case. If done correctly, it works. It’s also time consuming and relatively violent. I had to do this before, and I’ve damaged stocks. Remember that part about striking the buffer tube end of the stock first? Yeah, there is a reason for that. Also, doing all this when you need your gun to defend yourself is not ideal.

Springfield Armory has developed a solution for this issue. The new LevAR is a patented, AR charging handle that offers a sophisticated solution to the problem of a stuck case. It’s pronounced just like the word “lever”, but the AR signifies its use in the AR-15 platform. The LevAR is more than just a clever play on words. It’s also a clever device that uses physics to solve the stuck case issue.

Weighing in at 2.8 oz., the LevAR packs a punch well above the weight addition of just 1.7 oz over a standard charging handle. The main body of the charging handle is aluminum and, just like a standard charging handle, the latch that holds the handle in the closed position is steel. On the LevAR, the lever, the cam and the push button are all steel. This is the material that adds to the overall mass of the part. At the same time, the fact that these additional parts are steel adds to the strength of the lever and the camming mechanism.

When you don’t need the LevAR, it works just like a regular charging handle — and a good one, at that. It’s when you experience a stoppage due to a stuck case that the LevAR truly stands out. And at an MSRP of $99, it won’t break the bank.

The LevAR uses a lever (actually several) and a cam, to add mechanical advantage when operating the charging handle. When faced with a stuck case stoppage, instead of mortaring the rifle you can simply deploy the lever on the LevAR and quickly remove the stuck case.

The first steps are just like mortaring the rifle. First, recognize the malfunction. Next, move the selector to “SAFE.” Third, “Slap, Rack.” When you discover that the charging handle is stuck, that’s when you change course. Simply depress the spring-loaded pin on the right side of the handle and flip out the lever on the LevAR. Brace the buttstock on  your shoulder and then rip the LevAR to the rear. The charging handle will follow your firm pull and the case will come free.

The added leverage provided by the LevAR’s camming lever delivers the brute force needed to pull that stuck case from the chamber. To get the rifle back into play, simply close the LevAR, get a new round in the chamber, and you are ready to go.

I think that the LevAR charging handle is a truly innovative development. And it’s one of those unique “insurance policy” parts that I doubt I’ll ever really have to use with my SAINT rifles. But, if I were to come across a bad round at the worst possible time, it would be really nice to have one of these in my rifle.

Adding a mere 1.7 oz. to the weight of the gun, and offering great functionality as simply a charging handle when not in use with a stuck case, the LevAR seems to me to be simply a sound option for the prepared AR owner. You see, that’s what I like about innovation. It gives options. That’s why I like that Springfield Armory has brought this innovation to the market. 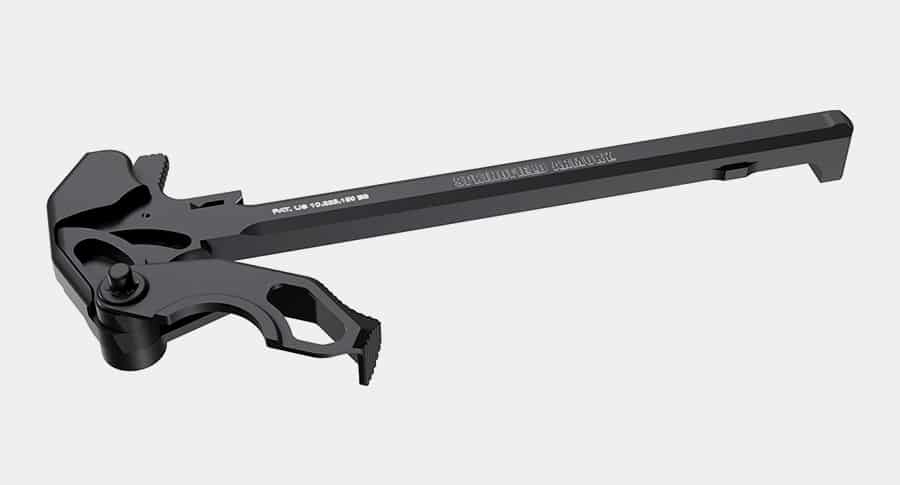