When my editor contacted me and offered me the chance to review the new Crimson Trace Hardline Pro 4-16x50mm scope, I jumped at the chance. Although Crimson Trace is still relatively new to riflescopes, and they seem to be putting out some very respectable products. I wanted to see if they could live up to this expectation once I had one in hand.

At the time of this writing, this optic is still pretty new so information is limited. Basically, the Hardline Pro series is geared towards the long-range and tactical shooter. Multiple scopes options are available in this series with either first or second focal plane reticles, capped and uncapped turrets, reticle illumination, and 30mm main tubes. I’ll dispense with a lot of fluff and instead refer you to the chart below for some of the more detailed specs on the sample I received for testing.

I’ll admit, I was impressed with the scope as soon as I opened the box. It seemed to be a very high-quality, well-put-together optic. However, it didn’t escape my notice that a wrench to reset the turrets wasn’t provided, nor were any instructions for how to reset the turrets and zero stop.

Now, I’ve been around long-range optics enough to figure it out, but I got in touch with customer service at Crimson Trace to let them know of these issues. They put in a genuine effort to get answers to my questions, and I even received a follow-up email from them a few days later saying that they would be updating their information for the end-user.  By the way, the size of wrench for the turrets and zero stop is a 1.5mm hex wrench.

So, let’s get down to brass tacks because I think for the price this scope is going to be tough to beat for under $1,000 (the model as-tested has an MSRP of $895). Out of the box, the first thing that I noticed was that the fit, finish, and just overall feel of the scope was superb. It’s lightweight, the knurling isn’t aggressive but is still effective, and the things that need to turn do so smoothly without any roughness, lash or hesitation.

That brings me to the elevation and windage turrets because usually scopes in this price range can be hit or miss with how the turrets feel. The turrets on this Hardline Pro are audible and very tactile. The click feel is sharp, and they don’t click as much as they snap. Honestly, I’ve used scopes that cost twice as much that didn’t have turrets that felt this good.

Sometimes, scopes in this price range can be a collection of compromises, and things like optical performance end up suffering at the altar of the sales price. That being said, this Hardline Pro 4-16X appears to have a pretty traditional optical design with a 4X erector, which I’ve found to be pretty forgiving.

Looking through this was always nothing short of delightful, with contrast and resolution that was well balanced and an image that appeared quite true to life. Colors really seemed to “pop,” and when looking at my black and white zero targets I noticed that the black squares still looked black (as opposed to just a dark grey, as they would in a scope with lesser contrast).

Going along with that excellent contrast was a marked lack of chromatic aberration, which can give contrasting colors a purplish or yellow hue around the edges. I noted that while I was viewing white steel targets against the berm, they were sharp and well-defined.

Like everything, optical design is a give and take, so if you have great contrast, sometimes the resolution isn’t so good. But I was quite satisfied with the resolution in the Hardline Pro. Fine details like the individual slats of siding on a house over 1,000 yards away and the mortar joints on a brick building 600 yards away were easily discernable. Edge-to-edge clarity was likewise excellent, and I didn’t detect any distortion or “fish bowling” of the image with the ocular set to the right diopter.

I’m a milliradian kinda guy, so I was glad to get this scope with Crimson Trace’s well-thought-out MR1-MIL reticle set in the first focal plane. (If you don’t know the difference, check out our first focal plane vs. second focal plane article for the full details.) I know it won’t be everyone’s cup of tea because it’s on the thicker side of things, but I think a lot of people will appreciate the thin .05 mil center dot and 0.2 mil subtensions for accurate wind holds. The thicker reticle covers more of the target but also makes it more usable across the magnification range, something especially useful in an FFP scope where thin reticles become useless past a certain point.

In low light, the scope performed very well as I had it out on multiple nights, testing it at various intervals up until about 30 minutes after sunset. Even when it was probably technically dark, I could dial the magnification down to 6X, turn the illumination to “1” and still effectively identify targets a couple of hundred yards away. I also thought it was a nice touch that Crimson Trace included a cut-off in between each setting so that I didn’t have to go all the way back to the off position when I was done. The illumination runs off a standard C2032, so it’ll likely provide many nights of illumination before needing to be replaced.

Of course, if a scope can’t track accurately and consistently though, it’s pretty much useless to me. I made sure to thoroughly test the tracking and return to zero both at the bench and at the range, which I’m pleased to say passed with flying colors. First, I tested the tracking using a collimator with a built-in grid that gave me reference points to dial to on both the elevation and windage.

Generally, 10 mils is enough to reveal any serious issues, and the Hardline Pro did it with ease, coming right back to the starting point each time. After I’d reset the zero stop at the range, I ran the elevation turret up to the top of its travel and then back down again, firing a shot each time. I did this probably a dozen times at the range and every time it came right back to zero, yielding a nice cluster of shots on my zero target, solidifying my trust in this scope.

While I was evaluating the scope, I made some observations that I felt bear mentioning. One of these is the parallax knob numbering. I found that for the most part the distance on the knob where I got parallax-free didn’t always correspond to the actual distance to my target. This is uncommon since the way the scope is set up to the individual, along with environmental factors, can combine to skew those numbers on the parallax knob. I was able to get parallax-free though from 50 yards to infinity, so the parallax adjustment is fully functional.

Another thing that I noticed while using the scope is that the zero stop creates a “soft” click the last 0.1 mil before you hit the stop. I believe this is due to the way the zero stop is designed as a simple clutch mechanism that bottoms out on the turret body when you get to the stop point.  Even though it’s a soft click, that doesn’t mean it’s not functional. As mentioned earlier, tracking and return to zero were perfect. An advantage to the clutch type system is that it grants you the ability to set the stop below the actual zero to provide flexibility for different conditions or ammunition.

The above shouldn’t be taken as criticisms, just observations that I made about this scope in particular.

I suppose my final comment about the Crimson Trace Hardline Pro 4-16x50mm is that it’s definitely hitting above its price point, by a fair margin. It’s a sleeper hit in my opinion because it’s a simple design that’s also versatile. I think this is what will make it appealing for a variety of shooters. It has the elevation travel and repeatability to make a good long-range scope, and also acceptable low-light performance for its use as a hunting scope. It also won’t break the bank, with an MSRP of $859.99. I’m sold on it! 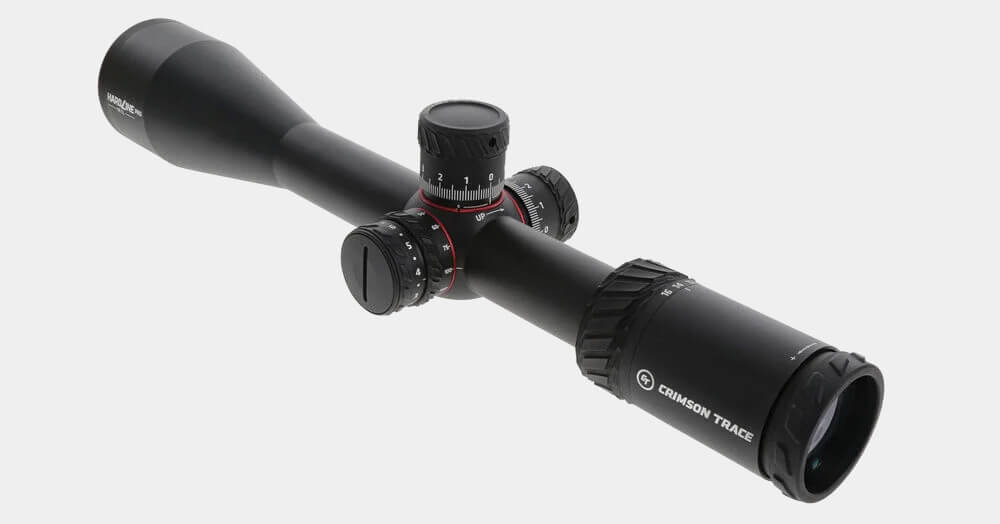