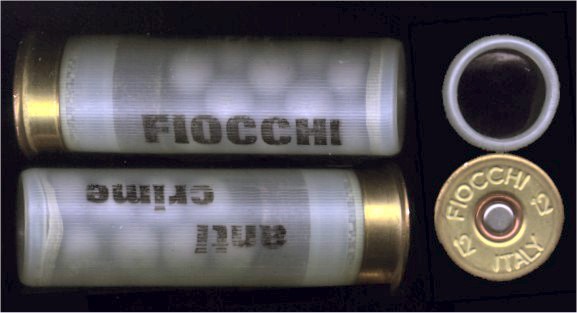 There are some occasional less-lethal alternatives for self-defense that are considered by various people, including rubber bullets, pepper spray and various inanities such as rock salt.

Just don’t. Salt will only harm you if you eat too much sodium, and it takes decades for it to make much of a difference.

Bean bags and rubber bullets are often used by police for riot control and other purposes, so it stands to reason that they’d be effective for home or otherwise for self-defense. Yes, but it’s not actually that simple…

Rubber Bullets Don’t Hit As Hard As One Might Think

There’s no doubt that rubber bullets are effective or that they will be effective, at least as far as rubber bullets as a class of projectiles. So, how rubber bullets work is that you shoot a person with a rubber projectile. Said projectile delivers a blow to your opponent, causing pain, certainly contusions (bruising) and possibly more damage besides, but probably not killing them.

How hard do they hit, though?

Elite heavyweight boxers hit very hard. According to Thrillist, Rocky Marciano was capable of dishing out 925 ft-lbs; Frank Bruno, WBC Heavyweight Champion for a couple of months in the 90’s (Bruno had the audacity to be a boxer at the same time as Mike Tyson) was capable of around 1,180 ft-lbs. Amateur heavyweights are said to produce about half of that.

That’s 10 percent or less of the force dished out by an elite heavyweight boxer, and less than half that of, say, a Golden Gloves heavyweight. Remember, how lethal bullets work is by penetration; with rubber shot, you’re relying on blunt force trauma, and the blunt force trauma is about equal to a stiff punch.

Rubber Bullets Are Controversial Even In Police Use

Even though they are less lethal than buckshot, use of rubber bullets and bean bag rounds is still controversial even by police. A number of countries have banned their use, and – make no mistake – they still cause a great amount of harm.

A study that appeared in the Lancet concerning rubber bullets used in Israel during a period of heavy rioting in the year 2000 examined hospital records. 151 males and 1 female were examined in hospitals, with 201 total wounds, mostly to the limbs but wounds to the face and torso were also common. There were 93 blunt wounds and 59 penetrating wounds, meaning the rubber bullets actually entered skin. Two patients died as the result of a rubber bullet penetrating the ocular cavity and causing brain trauma; a third died as the result of post-operative (the operation was on an injury to their knee) complication that resulted in lung failure.

A 2017 British Medical Journal literature review examined medical records of 1,984 people who were struck with rubber bullets, resulting in 53 fatalities and 300 permanent injuries. Of the 2,135 identified injuries (people shot with rubber rounds often present with multiple injuries from the event) 71 percent were deemed “severe.”

Bear in mind, none of this establishes the efficacy of rubber buckshot or rubber bullets as a method for stopping a home invader or what have you. This is just what happened to people that were shot with one.

Rubber Bullets Can Still Be Lethal

We mentioned above that rubber bullets produce less force than a stiff punch. That might be true, but remember that boxers have died in the ring or from injuries sustained during a fight.

Granted, the fatal injury is more often caused by the fighter hitting their head on the canvas AFTER suffering a knockout blow, but plenty of instances exist where punches alone caused fatal trauma in boxing, such as those of Frankie Campbell, Leavander Johnson and Robert Wangila to name a few.

No laws in the US declare rubber bullets or any other less lethal self-defense tools as having any sort of protected status where you don’t have to prove a reasonable threat to life and limb, or have to meet a lesser standard than you would if you used a gun loaded with lethal ammunition. Self-defense laws just don’t work that way.

Make no mistake. If you use a gun to defend yourself, that will be treated as deadly force. You will be held to the same standard.

So ultimately while it IS true that police officers use rubber slugs and bean bag rounds for riot control, and that may present something of a less-lethal alternative, the truth is that there is lethal potential. While certainly less lethal than buckshot or a hollow point slug, you could still do fatal damage and thus the legal requirements for armed self-defense must still be satisfied.

If you were considering rubber bullets as part of your home defense strategy, it’s up to you. But it would seem that the less-lethal option isn’t a confirmed stopper of hostile personnel, nor will use of it mean fewer legal hurdles to clear after the shooting stops.