It’s no secret that pistol caliber carbines are all the rage these days, and the reason is weakness, distemper and a lack of fortitude. People like them for bad reasons, and should be ashamed of themselves for it.

In the 1880s, there was a good reason to have one. Today…not so much. The world has changed, as well as the gun and ammunition industries. The incentive for having a carbine in the same caliber as your pistol…just isn’t as strong as it was in them days.

In short, there’s almost no reason to have a PCC. There are also a bevy of reasons why you should get something else. In fact, here are 3 such reasons why pistol carbines are just dumb.

Intermediate Cartridges Have Barely Any Recoil, So That Isn’t A Reason For A Pistol Carbine 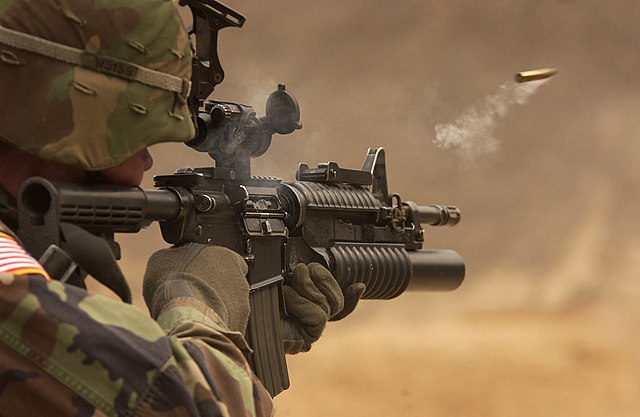 One of the reasons why people like or value a pistol caliber carbine is the relative lack of recoil. This is silly, as plenty of intermediate rifles as it is…barely have any at all.

An 8-lb rifle (about the weight of most ARs with an optic and full magazine) firing .223 Remington or 5.56mm NATO produces less than 4 ft-lbs of recoil. That’s like being shoved by an arthritic mouse.

So the idea that a PCC can be a pool weapon is not without validity, but the reality is that so can an AR, so can an AK, so can a Mini-14. In other words, a pistol caliber carbine solves a problem that isn’t a problem.

You can’t say that PCCs are more compact; given NFA rules they have to have a 16-inch barrel or no stock, and guess what? So do ARs and AKs, so that isn’t a problem they solve either.

It’s not as if 9mm really packs all that much more punch out of a longer barrel. There are some pistol calibers that do (10mm, .44 Magnum, .41 Magnum, .45 Colt+P) but the reality is a compact rifle shooting a rifle caliber will still pack more wallop and with minimal recoil.

So really…the existence of intermediate rifles negates the concept, and those have been a thing for quite some time.

You’re Only Using It For Plinking Anyway; Get A 22 Already

People who buy PCCs give all sorts of reasons for it, but everyone knows what the real reason is: it’s to go “pew pew pew” at the range. To burn ammunition. Not to train or do anything serious.

Oh, sure; there are a few people who probably do and there certainly are PCC divisions in many competitive shooting series nowadays, but this is far and away the minority of people who own them.

Most people just take them out in the sticks and blast away.

That’s called plinking, and smart people know that plinking is a lot cheaper in terms of buying rifles and in buying ammunition when you get a .22, so why not just belly up to the right bar for once and get a 10/22 or something?

Look, there’s nothing wrong with plinking and shooting for the pleasure of doing so. Not a thing at all, and in fact it’s a great way to spend an afternoon.

But let’s be honest here: that’s what most people get a PCC for, because that’s what they do with it. They take it to a range, blast a bunch of targets, get a big grin on their face (hey, it IS fun!) and that’s it; only the nerds are out there training with a shot timer and stuff.

Point being, though, that if you’re going to get a plinking gun you might as well do it right and just get a .22. What you save in the purchase price can be spent on more ammo.

In 1873, having a carbine in the same caliber as your pistol was not only practical on paper, it was darned economical.

You see, ammunition was harder to find and more expensive when you did find it. Therefore, every shot had to count; you couldn’t just burn up ammo by the case. Even the military was sparing with ammunition outside of wartime.

Heck, that didn’t really even change until almost the end of the 20th century; people could buy loose cartridges at gun stores up until a couple of decades ago. And a lot more people used to handload, too!

In that scenario, it therefore follows that having as few different calibers that you had to have a supply of made a lot of sense. Having a gun in a common caliber made sense, too, which is why a lot of folks had a rifle as well as a handgun chambered in .44-40, .38-40, or .32-20.

It makes sense for law enforcement as well as the common man. A couple of boxes would keep your rifle and your pistol fed at the same time.

This is, of course, a common reason given for having a PCC in the same caliber as your concealed carry handgun, but that idea doesn’t really apply anymore.

Granted, in shorter supply and darned expensive at the time of this writing, but still.

Ammunition is (under normal conditions, of course!) more plentiful and cheaper than it was in the days when having that 1873 rifle and Colt SAA revolver in the same chambering made too much sense to not do.

Also, it’s not like you’d get confused about what gun takes what ammunition; you cannot confuse 9mm Parabellum with 5.56mm NATO. One is a pistol cartridge, the other a rifle cartridge.

So really, the incentives that previously made having the same caliber for all your guns a best practice…don’t really apply anymore.