The M1A has an impressive lineage. Based on a design dating back to the 1930s and born from the prodigious mind of John C. Garand, the M1A has many of the hallmarks of his M1 Garand rifle. However, it is even more closely tied to the M14, the rifle developed as the successor to Garand’s classic military rifle.

And while the M14’s reign as the U.S. military service rifle may have technically been short, its influence and capabilities have carried on well beyond its official role as a front-line military rifle. In fact, the spirit of this select-fire combat rifle carried on in the semi-automatic-only M1A rifle from Geneseo, Illinois’ Springfield Armory, which has continuously produced the rifle since 1974.

But how does the M1A stand up to the original M14 rifle? Does it have the capabilities and — possibly even more important — the durability of its military sibling? As the M14 came from an era of rugged strength and durability, as well as the use of wood and steel, the M1A has a lot to live up to.

Recently, I had a chance to chat with Jason Chambless of the Research & Development Department at Springfield Amory. Jason (or “JC” as he is known), has been with the company for nearly 30 years and has worked with practically every gun the company produces, as well as some interesting ones from Springfield Armory’s past.

He worked with the M1A for many years, as well as the company’s SAR-8 (a G3-based semi-auto rifle) and the SAR-4800 (a FAL-based semi-auto rifle). He also worked on the S.A.S.S. (a fascinating 1911-based single-shot pistol that chambered rounds such as the .44 Mag. as well as the 7mm-08), the popular M6 Scout and M1 Garand rifles. It was his transition over to 1911 pistols that led him to Springfield Armory Custom, and he later was inducted into the American Pistolsmiths Guild. He has been with the R&D department for the last several years. 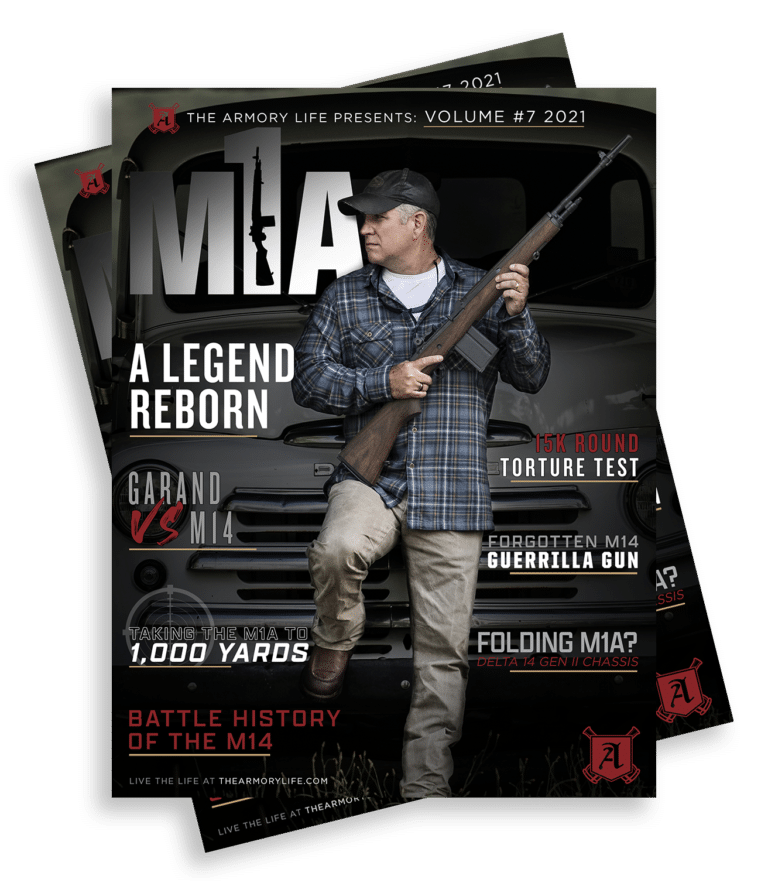 This article is featured in
Volume 7: M1A Digital Magazine

While I was chatting with him, I noticed an M1A sitting on a table that looked like it had been put through the wringer. The gun appeared to be fully functional, but it had clearly had some rounds put through it. And it did not look like it had been babied during the process. I asked Jason what the story was with that gun, and he smiled.

“We’ve put a lot of rounds through that gun,” he told me. I noticed a certain emphasis on the words “a lot.”

As I asked questions about the gun — and the process — I learned that they regularly put Springfield Armory firearms through endurance tests to check for irregularities or malfunctions. Sure, spot-checking here and there can be effective, as can be shooting for groups to ensure performance. But nothing tests the mettle of a firearm like round-intensive endurance test. And this tells me that Springfield cares about the quality of its products.

“So how many rounds are we talking about, here?”, I asked him. When he told me the number, I was impressed. Very impressed. What was that number? 15,000 rounds. Through a single gun. Fired over the course of five days. And I was holding the result of that test in my hands as we talked.

“Two other members of the R&D team and I have been running that gun as part of the test in our climate-controlled indoor ready range here,” JC told me. With that kind of volume of fire, it is simply too much for just one shooter to handle on their own. He explained that they do it to test the gun for function, as well as check the mechanics of the rifle and also the durability of its parts. Basically, it’s a stress test for the rifle to find out what most shooters would never see during regular shooting sessions.

Obviously, I was interested in how the testing went. The gun was still in one piece, so it clearly had survived. The rifle was an M1A Standard Issue with a synthetic stock. No special models here, no special treatment. Just a basic, stock model of the classic M1A design. In fact, it was a random rifle pulled from inventory, that just happened to be a synthetic stocked model rather than a walnut one.

As I rolled the rifle over in my hands, noting the brass impact marks on the operating rod, I could tell it had been run hard. But what exactly had happened during the test? As I dug deeper with JC on it, I learned that the testing was broken up into strings of fire of 200 rounds each, fed by ten 20-round magazines. The ammo used was Federal/American Eagle 150-gr. FMJ loads.

Interestingly, he told me they removed the handguard for the testing. This was done to help the cool more easily and not retain any more heat than necessary. This obviously required some care on their part when handling the gun during the test, as the barrel got very, very hot. Also, the rifle was purposely run semi-dry with minimal lubrication to the bolt and operating rod to monitor any premature mechanical issues. The only cleaning of the M1A done was to run a bore snake through the barrel every 1,000 rounds.


I have read and agree to the terms & conditions.

Please stand by as we submit your request…

Sorry, an error occurred and we could not sign you up.

As they ran these 200-round strings, they would monitor the feeding, ejection, last-round lock back, potential parts failures, headspace deviation, and more. After each string of these 200 rounds, the rifle was positioned in a fixed support and force cooled to allow them to be able to check headspacing and critical inspections including the fitment of the operating rod in the receiver, any irregular wear on bolt and firing pin/camming areas, hammer/sear wear, etc. and parts.

The Fly in the Ointment

What was it that happened just over the 9,000-round mark? JC explained that they noticed a few short strokes of the action. They were sporadic, but they were happening. They stopped the test, cooled the rifle and did a close inspection of the rifle.

A detailed inspection of the piston revealed fouling inside the gas cylinder. It was quickly determined that this was the source of the short strokes with the rifle. The piston was removed, cleaned and reinstalled, and the test began again.

The rifle at 10,000 rounds? Running smoothly. At 11,000? Still running. In fact, the rifle ran without a hitch all the way up to its pre-determined stopping point of 15,000 rounds. When I asked JC why 15,000 rounds were chosen for the text, he explained that this amount provides a good “window” for them to observe any irregularities in any of the products. Sounds like a pretty successful test, doesn’t it?

Obviously, this was a very severe test to put the M1A through, far beyond what most if not all normal shooters would ever subject their rifle to. Clearly, it had made it through the test with flying colors. Heck, the fact it was still in one piece — no rattle, no looseness, etc. — was impressive enough.

JC explained to me that at the end of the test, they cooled the rifle and gave it a thorough cleaning, followed by a detailed inspection and headspace check. Apart from some wear and tear to the stock as well as the phosphate finish on the steel, the rifle came through it in quite good shape. They found no parts failures, and the headspacing held strong (at 1.633).

Yep, a pretty successful test. I was already a fan of the M1A (and have been since my teenage years when I got my first one), but I was blown away by its endurance. When I asked JC his thoughts on it, he simply said “I would expect nothing less of these rifles.” Works for me!

This article is featured in
Volume 7: M1A Digital Magazine

Firearms in this article

The post An M1A. 5 Days. 15K Rounds. appeared first on The Armory Life.